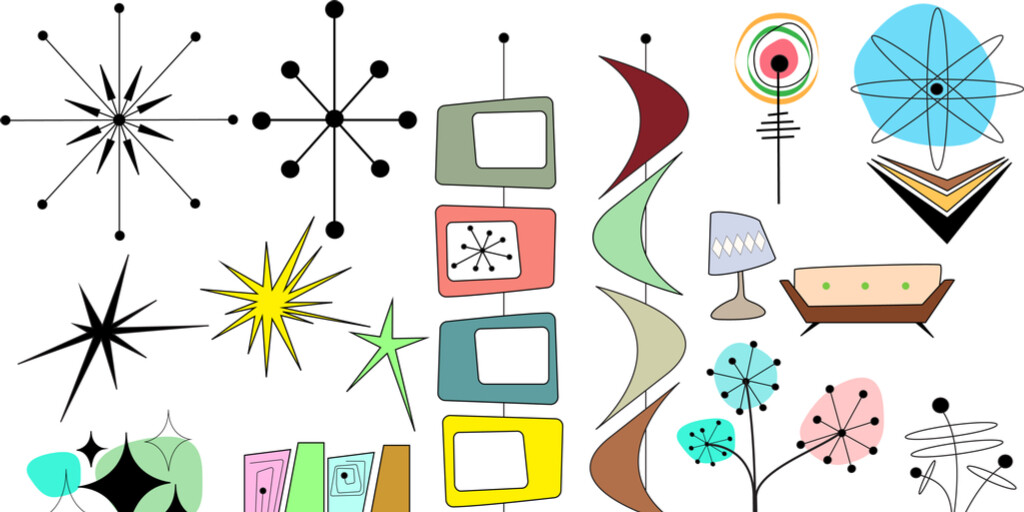 Like the Mid Century Modern architects and interior designers, the artists ofearly and mid-twentieth century departed drastically from the styles that came before—namely, the realistic Academic art that dominated for centuries since the Renaissance. Modern artists abandoned the “narrative” style of rendering subjects realistically to focus on abstractions of subjects instead.

Mid Century Modern artists believed art needed to do more that delight the eye. They used color, shape and geometry to evoke emotion, challenge the mind and shock critics and the viewing public.

Henri Matisse (1869 – 1954) – Matisse, Pablo Picasso and Marcel Duchamp lead the modern art movement that started in the early 1900s. At school Matisse learned of Impressionism and began shape his own style in it. In the early 1900s, he spearheaded “Fauvism” or the use of bold colors and shapes rather than strict realistic depictions of subjects. His flat lines and controlled shapes drew attention which sparked the name Fauvism, French for “The Wild Ones.” Critics panned these works, but a purchase by Gertrude Stein helped Matisse’s prospects. He was very prolific from 1906 to 1917. He met Pablo Picasso at Gertrude Stein’s home during the time, and the two became friends, collaborators and, sometimes, rivals. The Steins and others financed a school where Matisse taught students to support the wavering income from painting sales.

In 1941, abdominal cancer left Matisse wheelchair bound and unable to paint. With the help of some students, he began creating art in the form of thin paper shapes applied to canvases and walls. These “decoupage” (paper mache) works started small but soon enough stretched to mural size. Matisse paintings now fetch in the tens of millions at auctions.

Pablo Picasso (1881 – 1973)  – One of the most famous and prolific artists of the 20th century, Pablo Picasso was instrumental in creating the Cubist movement within the abstract Modern art movement.

Influenced by Impressionist artist Paul Cezanne, Picasso broke his subjects down into geometric forms, prioritizing shape. Like the Mid Century Modern architects and interior designers, he revolutionized the standards of art appreciation.

An early prodigy, Picasso gained admission to Barcelona’s School of Fine Arts in Barcelona. From the beginning of his career, he was interested in all subjects and could work in many styles, often incorporating several in one work. He dominated European art in the first half of the 20th Century. He created over 50,000 works, including paintings, sketches, and sculptures. His pieces reliably break auction house records when they come up for sale, and several have sold for over $100 million.

Several museums feature Picasso’s work including the Musee Picasso in Paris and the Museo Picasso in Barcelona. At the time of his death in 1973, his estate was worth $500 million dollars.

Marcel Duchamp (1887 -1968) –  Duchamp came from an artistic family. His grandfather was a successful engraver and three of his siblings attended art school and worked as painters and sculptors. When it was his turn to attend the Lycee Pierre-Corneille, his instructor was intent on steering all students away from Impressionism expressed by Van Gogh, Cezanne and Renoir. Duchamp did not succumb to this pressure.

After earning a living as a cartoonist for a short period, Duchamp was conscripted into the French infantry in 1906 where he apprenticed with a printer. The typography printing skills informed his painting later. Around 1910, he was out of the infantry and socializing with other artists. He became fascinated with transition, change, movement, and distance—concepts clearly evident in his best works. Duchamp and his contemporaries were striving to achieve a “fourth dimension” through their art.

Determined to “serve the mind,” rather than the eye, Duchamp created artistically rigorous works. His first provocative work was Nude Descending the Staircase. The nude is rendered in mechanistic frames with shapes superimposed. Many believe it was influenced by the new motion pictures. The work’s genius lay in the fact that it’s both fragmented and synthesized. It scandalized the Americans so much, he got sales of it and four more paintings. This attention prompted him to move to America where several patrons set him up in a studio with an allowance.

An avid art collector and chess player, Duchamp gave up painting for about 25 years before surprising the art world with his last piece, Etant Donnes. In later life, he advised Peggy Guggenheim and other collectors, shaping modern art standards in America.

Jackson Pollock (1912 – 1956) –  Notoriously volatile, Jackson Pollock was quickly expelled from his first art school. Pollock learned about the use of liquid paint (house paint) in 1936 at an experimental workshop in New York. He also drew inspiration from Indian sand painting, where artists drop colored sand onto cleaned ground spaces.

Clearly having found his style, he began to put his canvases on the floor and cover them with paint using not only his hand and arm, but movements from his entire body. Pollock’s method, termed “drip” or “action” painting, was unlike anything that had come before. If the critics thought Picasso and Duchamp were “abstract,” Pollock took formlessness one step further. He often lapsed into a frenetic dancing style while creating his art.

From 1938 to 1943, Pollock worked for the WPA Federal Arts project. Then Marcel DuChamp recommended him to Guggenheim Museum founder Peggy Guggenheim. She commissioned an 8 x 20 mural for her home.

Upon seeing it, art critic Clement Greenberg, remarked, “I took one look at it and I thought, ‘Now that’s great art,’ and I knew Jackson was the greatest painter this country had produced.” The catalog introducing his first exhibition described Pollock’s talent as “… volcanic. It has fire. It is undisciplined. It spills out of itself in a mineral prodigality, not yet crystallized.”

Dedicated to the ultimate in abstraction, Pollock rejected titles for his paintings, choosing to number them instead. Where some critics see Pollock’s work as meaningless messes, others appreciate the complete lack of beginning or end.

Andy Warhol (1928 – 1987) – The pioneer of Pop Art, Andy Warhol explores the connections between art, celebrity and advertising. He worked in silkscreen, paint, photography and sculpture.

Warhol started as a commercial illustrator before exhibiting his art in several galleries starting in the 1950s. His renderings of celebrities as well as everyday objects like soup cans and dollar bills connected with an audience who interpreted them as expressions of consumerism. Warhol called these works “Pop” because they contain images from popular and mass culture rather than subjects depicted in “fine” art like figures and landscapes. His most famous works involve common objects like the Campbell’s soup can. These pieces and others like them challenge viewers to question the definition of art.

With this notoriety and the financial freedom that came with it, Warhol established a creative space in New York City called “The Factory.” He drew many other artists looking to depart from traditional painting and film-making styles.

In his book Popism: The Warhol Sixties, he explains, “Making money is art and work is art and good business is the best art.” He also once remarked, “I love Los Angeles. Everything’s plastic, but I love plastic. I want to be plastic.” These attitudes informed his art.

Between 1963 and 1968, he made more than 60 experimental films. Eat depicts a man eating a mushroom for 45 minutes. All six hours of Empire features the Empire State Building at dusk. His most successful film, Chelsea Girls, involved two films projected at once with the volume of one raised and lowered depending on key moments of the story.

In 1968, a mentally ill follower, Valerie Solanas, shot Warhol, nearly killing him. Doctors had to massage his heart with their hands to keep it pumping blood. His injuries affected him for the rest of his life.

In the mid-1960s, Warhol adopted the band Velvet Underground. He had them play for his film openings and at galleries. When Warhol and band leader Lou Reed disagreed on the band’s direction, Warhol dropped his sponsorship. His work influenced artists like Devo and David Bowie, who played Andy Warhol in the movie Basquiat.

Warhol died in 1987 after undergoing gall bladder surgery. His recovery was complicated by wounds sustained in the murder attempt. When Southeby’s auctioned his estate, its worth came to $20 million, all of which went to promoting the visual arts. The Andy Warhol Museum of Pittsburgh currently displays many of his best works.

Paul R. Evans II (1931 – 1987) – Like many of the Mid Century Modern architects and artists, Paul Evans studied at the Cranbrook Academy of Art. He, too, longed to create a new approach to art that departed from the heavy and ornate styles.

Specializing in metal-work, Evans used sculpted steel, copper, bronze, and pewter to create complex and innovative pieces. He ran a shop like an industrial laboratory, often seeking out the newest materials to incorporate into his designs. Many consider his furniture to be abstract sculpture more than practical home decor.

Russel Wright (1904 – 1976) –   This artist’s work stemmed from his conviction that the table was the center of the American home. It’s no wonder that his best work came in the form of tableware, namely China. Like the other Mid Century Modernists, he kept the concept of simple, informal living at the forefront of his designs for homes, furniture and decor. Many give him credit for revolutionizing how Americans organized their homes in the mid century.

Wright’s simple, function furniture designs were produced by Conant-Ball company. Careful to include, “American Modern Built by Conant-Ball” on each piece, the company was glad to find a designer to satisfy the modern American homeowner. Wright also worked with a rustic furniture company to update their line with modern stylings. Many of his designs remained available through these companies through the 1960s.

Georgia O’Keeffe (1887-1986) – Called, “the mother of American Modernism,” Georgia O’Keeffe departed from traditional artistic styles by rejecting the boundaries between representation and abstraction. To create a multiplicity of meanings, O’Keeffe focuses on close-ups of flowers’ reproductive organs and animal skulls in order to remove any context. The goal is to force an entirely new perception of the subject. While many claim Her close up depictions of flowers represented female sexuality, O’Keeffe always denied this aim.

O’Keeffe began her studies at the Art Institute of Chicago before starting a teaching career at the University of Virginia. Encouraged by photographer and art dealer Alfred Stieglitz, O’Keeffe moved to New York to work as a serious artist. The two married in 1924. In 1929, O’Keeffe started spending time in New Mexico, where she was inspired to paint sun-parched cattle skulls. When she died in 1984, she left her entire $76 million estate to a young protege. In 2014, O’Keeffe’s Jimson Weed sold at auction for $44.4 million.