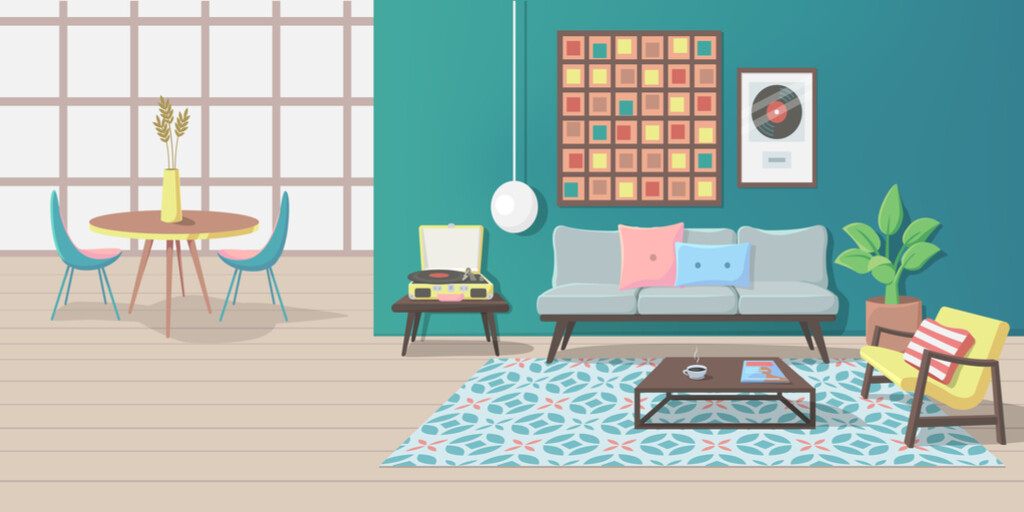 The thing is, we already had a solid noun for open-concept, simple and functional rooms: Mid Century Modern interior design.

The style featured in AMC’s Mad Men (2007 to 2015) has reignited the Mid Century Modern style. Consumer fascination with Mid-Mod is so strong that:

And there are many more examples of businesses leveraging the nationwide popularity of a television show about advertising. Today, a handful of magazines, scores of events, societies and museums, and hundreds of designers all pay homage to Mid Century Modern interior design.

The style that dominated homes from after World War II until the late 1960s is defined by specific characteristics. These characteristics spring from principles taken from Mid Century Modern architecture. Many of the architects of the 1920s and 1930s unleashed their artistic skills not only on a building’s exterior, but brought to home interiors their dedication to open-concept, environmental integration, simplicity, functionality, geometry and nature.

These features work well today for several reasons. First, just as homeowners after World War II were looking forward to the future, with technology advancing at lightning speed today, we all have an eye on the the gadgets and gizmos coming our way. The futuristic look still appeals.

At the same this technology unleashes a craving for simplicity. Americans in the 1945+ era had just experienced a brutal world war, and came to view home as the comfortable sanctuary, much as we do today. Still, that mindset was a departure from home as a showplace.

Overall, when you walk into a Mid-Century Modern home, you’ll find these design elements.

Who needs walls when flow is so much more communal?

In 1945 and after, the government drove architects and other entities to build appealing homes for more than the monied class. Architects were no longer limited to designing homes for those with servants. Instead, parents wanted to be able to prepare meals while supervising children or have guests wander from kitchen to dining room to living room during a party.

No longer needing to seal off the busy kitchen (and staff) from a stuffy, formal dining room or a room for “courting” away from the parents, one of the primary objectives for modern designers became opening up as much space as possible.

In addition to more together time, this level of spaciousness evokes a sense of relaxation. If the rooms are further extended to the outside environment with large, plate glass windows, all the better.

Enamored of environmental beauty and natural light, Mid Century Modern designers insist on walls completely made up of windows. Windows can be 12 feet high and just as wide. While they could probably go wider, in the unlikely event of a crack or break, it’s less expensive to replace one panel rather than a whole wall.

What’s more, curtains do not appear often in Mid Century Modern homes. If the homeowner is interested in a little privacy, the designer may forego completely open windows and encourage skylights or a bank of skylights.

Luckily, today’s glass is strong and insulated, ensuring that the interior climate can be heated or cooled efficiently. In these homes, a radiant heat floor keeps residents toasty.

Where once large, ornate furniture crowded the most prestigious homes, the Mid Century Modern aesthetic includes carefully selected pieces, and not too many.

Primarily, they’re selected to meet the needs of the occupants first, be comfortable for them and appeal to aesthetics only third. That means that you’ll find many tables with handy nooks and crannies, desks with all cubbies hidden behind sealed doors. Chairs should be light, comfortable and easy to move and clean.

To maximize the light, airy feel, each room contains low furniture with surfaces on a single plane. Furniture often stands on either small pegs legs angled outward or floating frames. With no apparent support, floating pieces are typically bolted into the wall and held aloft with beams.

Clearly the Tulip Chair (left) and the Eames Chair (right) showcase the central tenets of Mid Century Modern design. Their minimal bases convey a sense that the seats are floating. The simple lines bring comfort to the fore. The Tulip Chair’s plastic form and the shaped thin wood panels supporting the Eames Chair were both initiated during the industrial revolution and perfected after World War II.

Where traditional styles ignored the home’s landscape on the most part, Mid Century Modern integrates outside color, shape and texture in the interior design.

First, the floor-to-ceiling windows create gorgeous living art provided by the tiered garden beyond. The designer echoes the palm frond shapes outside with the plants inside. Common to Mid Century Modern style, the plants have different heights. The white trim above the windows picks up on that on exterior columns and wall. Even the nubbly rug coordinates with the neutral cement and stone colors outside. The rug also emphasizes natural materials, as does the metal, marble and glass.

Post-war creatives couldn’t help but work with the new materials manufacturers were developing. Once plastic, acrylic (a.k.a. Plexiglass, Lucite), plywood and insulated glass proved sturdy and even attractive, designers worked with molds and learned from each other how to create affordable, functional furniture.

One bold color in a background of neutrals invigorates the Mid Century Modern design.

With their love of the outdoors, it’s no wonder Mid Century Modern interior designers focused on neutral, earth tones. Still, the inside deserves a little differentiation, and so most added one bold color to their interior palate. The goal was to ensure that neutral color walls would receded, allowing the interesting geometry of the furniture art and accessories to stand out.

Creative Use of Metals in Mid Century Modern Interior Design

Once color, light and nature had enriched a space, Mid Century Modern design added depth to a space by adding metals. Mid Century Modern catalogs are full of geometrically shaped clocks, wall pieces and modern, movable chandeliers made of brass, brushed nickel, painted metal and steel. Designers like the sense of luxury metals provide. When matched with woven, velvet and stippled fabric, the contrast brings exceptional warmth and interest.

Some even thread metallic strands through soft pillows and lap blankets. Shimmering accents create surprise and help elements blend. You’ll also see tables and trays trimmed in warm brass. These coordinate well with curved lamp bases. Brass may be the most popular accent metal, but copper, chrome and brushed nickel increasingly appear at home shows and in catalogs. IKEA’s floor lamps come with coppery linings inside the shade.

While room colors can be neutral, those with a penchant for Mid Century Modern design can spice things up with geometric patterns in fabrics, accessories, upholstery and even wallpaper.

Of course, materials this busy must be used sparingly. As with the one accent color designers like to use against a neutral background, these few pieces stand out.

All the open airiness modern designers like leaves space for simple, sweeping lamps with clean lines and lot of powerful function. Lamp shades can be the accent color, the accent geometrical fabric or just blend, depending on what the designer wants to achieve.

You can’t get more simple than the simple globe light that pulses warmth, relaxation, and of course, maximum lighting. Then there’s the update on the chandelier, where movable rods ensures users can change the lamp easily depending on changing needs.

Finally, recessed ceiling lights are common in Mid Century Modern style homes because they make for clean lines over ceilings and bright light that can be aimed at art or on pieces the homeowner wants to emphasize.

If Don Draper’s office and home spoke to you on so many levels, rest assured that you can bring the lively, open and relaxed style into your home piece by piece, affordably.

Many designers start with one unique piece and design around that. You can probably go back up through this article’s images and pick out that special piece that caught a designer’s eye and reverse engineer the addition of other pieces.

Explore Mid Century Modern home tours , shows and preservation efforts to get an idea of what you like and what pieces cost. We think Mid Century Modern furniture, fabrics and accessories will only become more valuable in the coming years.

Become a  true connoisseur of Mid Century Modern architecture and interior design when you stay up-to-date on this site and on our sister site www.mid-century.com.

Please send any questions or comments to: Contact Us