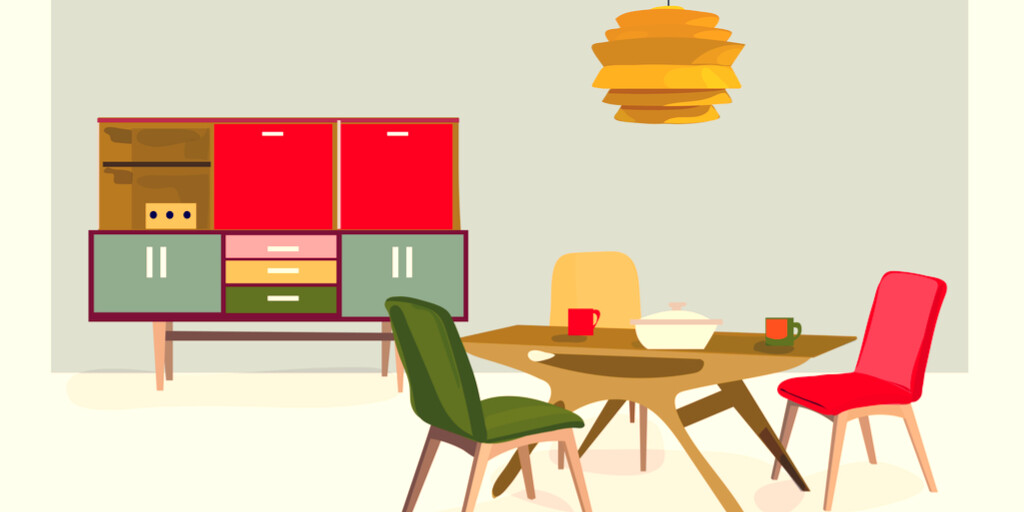 Mid Century Modern designers, like the architects of the period, featured simplicity, comfort, pattern, affordability and new materials in their creations. Design from the 1890s to the 1960s had its roots in, first, the Industrial Revolution and, then, World War II.

The Industrial Revolution provided new, mass-produced and affordable materials that were further perfected in the 1930s and 1940s. Two brutal World Wars drove the creative classes to build futuristic homes that would be comfortable for middle class families.

Incentives from the federal government, too, spurred architects and designers to create appealing yet affordable homes that the average American could afford.   Between 1944 and 1952, government programs provided 2.4 million veterans with government backed home loans. Pair this with the post-war baby boom, and you can see how the simple but appealing single-family-home took off.

Levittown was the first mass-produced tract home development in the United States. Built by developers the Levitt brothers, the homes sprung from Frank Lloyd Wright’s Usonian movement where affordable homes first task was usefulness. The Wright – Mid Century Modern principles included a focus on natural lighting (big windows!), open-space flow inside (kitchen, family room, dining room connected), the continuance of the outside inside, and simplicity.

The designers listed here influenced and supported each other. Furniture companies (Hans and Florence) Knoll and Herman Miller supported these innovative designers by licensing and selling their work.

Gio Ponti (1891 – 1979) – Like many creatives of the period, Gio Ponti was a true “Renaissance Man.” As an architect, interior designer, and artist, he created homes, commercial, interiors, furniture, decorative porcelain pieces, silver designs and art. He built 100 buildings around the world, mostly in Italy.

In keeping with the modern penchant for simplicity, Ponti removed all unnecessary weight and material from furniture, leaving the structure itself to carry all the beauty. This modern version of the chair weighs just 3.75 pounds. As light as the chair appears, it is very durable.

Today, Gio Ponti’s pieces are much in demand. Collectors believe they represent the best in Italian modernism. Enthusiasts can pick them up at galleries, auctions and some sites like 1stDibs. Be ready to spend wherever you come across them, however.  One authentic Gio Ponte asymmetric cabinet is listed on 1stDibs with a starting  price of $29,500.

George Nelson (1908 – 1986) – While George Nelson came to architecture and design by accident while studying at Yale, he became one of the most prominent design minds in the 1940s and 1950s.

He started his career writing for architectural magazines and then, after World War II, published an influential book, Tomorrow’s House, where he promoted two brand new home ideas: the family room and the storage wall. Those did not exist before George Nelson.

Impressed by the book, the CEO of Herman Miller Furniture appointed Nelson as director of design in 1945, a role he kept until 1972. The CEO wanted the most innovative and useful furniture possible and felt Nelson could deliver that.

George Nelson’s most notable works include the sling sofa (leather with fabric pillows), the ball clock, the kangaroo chair and the coconut chair.

George Nelson died soon after his retirement in the mid 1980s. Mid Century Modern enthusiasts can find George Nelson furniture on 1stDibs, Ebay and others. Most pieces on 1stDibs list at under $10,000.

Edward Wormley (1907 – 1995) – After some coursework at the Chicago Institute of Art, Edward Wormley ran out of funds and went to work at Marshall Fields.

In the middle of the depression, he met the head of the Dunbar Furniture Store who hired him immediately. Wormley’s his career took off. Spring-boarding from European and Scandinavian styles, Wormley created elegant furniture with clean lines. His style was a hit.

Wormley’s creativity wasn’t strictly limited to the tenets of Modernism, however. Instead, he melded classical influences into Mid Century Modern tenets.

This Wormley piece reveals the simplicity of modernism with Asian flair.

Harry Bertoia (1915 – 1978) – This designer moved from Italy to the United States when he was 15 and quickly gravitated to top design school Cranbrook Academy of Art, where Ray and Charles Eames, Walter Gropius and Florence Knoll studied and taught. As World War II crashed over Europe, Bertoia began designing with rare metals. While he first focused jewelry in the post-Depression era, soon he worked metal into sleek furniture.

Fellow designer and Cranbrook graduate Florence Knoll invited Bertoia to work with her in Pennsylvania where he developed his most famous piece, the Diamond Chair.  Bertoia’s Diamond Chair became popular immediately. He explained his diamond chair as, “mainly made of air, like sculpture. Space passes right through them.”

Bertoia’s diamond chair was so profitable, the designer was able to retire from furniture design.

Eventually, Herman Miller won the license for the Diamond Chair with Bertoia and Knoll cut into the deal. Immensely popular and profitable, the Diamond Chair allowed Bertoia the freedom to focus exclusively on sculpture. In the 1960s, he began experimenting with sound sculptures—complex arrangements of tall vertical rods on bases that he would play with his hands. He recorded these sounds on 11 albums called “Sonambient,” which were sold as collectors items today. You can find Bertoia’s Diamond Chairs on many auction sites like eBay and 1st Dibs.

Arne Jacobsen (1902 – 1971) – At the Royal Danish Academy of Fine Arts, Danish architect and designer Jacobsen became enamored of the modern works of Walter Gropius and Mies van der Rohe. During his studies and soon after, he won several major design awards.

Arne Jacobsen, both and architect and furniture and accessory designer, is known most today for his furniture.

Primarily an architect, Jacobsen is known for many prominent Danish buildings, including the SAS Royal Hotel and the Royal Danish Embassy in London.

Arne Jacobsen originals are still available at modern furniture company Fritz Hansen, a company he collaborated with extensively in the 1950s and 1960s.

Charles Eames (1907–1978) and his wife Ray Eames (1912–1988) – The creators of the ubiquitous Eames Chair for offices, Charles and Ray Eames were at the center of Mid Century Modern design world from the 1940s through the 1980s. They met at the Cranbrook Academy of Arts where they also worked with designer Harry Bertoia, architect Eero Saarinen and others.

Their early office furniture designs for Herman Miller provided them the capital to start their own company, Eames Office. They spearheaded the use of plywood in furniture design. Plywood could be molded into unique shapes that expressed the modern aesthetic: clean, simple lines that were often curved. Their most prevalent contributions include the Eames Lounge Chair and the Eames shell chair made of molded plastic.

Ray Kaiser Eames began as a painter and one of her paintings still hangs in the Whitney Museum of American Art. She met Charles at the Cranbrook Academy of Arts and they married in 1941. While Charles was the more outspoken marketer of the pair, they collaborated equally during the 40 years they were in business together. You can still buy many Eames designs including the Eames Lounge Chairs from the Herman Miller company.

Eileen Gray (1878 – 1976) –  British furniture designer Eileen Gray began her career at fine arts academy The Slade School in London where she quickly gravitated to furniture design. After a move to Paris to continue her studies, she worked so hard, she developed “lacquer disease” from over-exposure to the material. Soon, she was developing pieces for Paris’s most wealthy residents.

Originally from the United Kingdom, Eileen Gray chose Paris as her home.

Gray’s breakout commission was the design of fashion shop owner and socialite Juliette Lévy’s Paris apartment. It was so successful, that a Harper’s Bazaar article from the time called it, “‘thoroughly modern although there is much feeling for the antique.” The antique touches won it praise for being Art Deco as well as modern.

This project featured two of Gray’s most iconic designs: the Bibendum Chair and the Pirogue Day Bed. These were so popular, Gray opened her own Paris shop in 1922 called Jean Desert with the first name Jean to disguise that she was a woman. The shop was successful until the Great Depression ravaged Europe.

Early in her career, exotic woods, ivory and furs featured prominently in her design style. She had a penchant for all things North Africa and longed to introduce them to more staid European homes. By the mid-1920s, however, influenced by Le Corbusier, she began creating more modern designs like those below.

In 1930, the Great Depression forced Gray’s store, Jean Desert, to close. She worked as an architect and created two celebrated homes that were damaged during World War II. Interest in her work came and went throughout the years, but a Dublin exhibit of her work in 1973 ended in her getting an honorary fellowship by the Royal Institute of the Architects of Ireland. She was 95 at the time.

Today, you can buy Eileen Gray designs at Bauhaus 2 Your House. (Bauhaus was the first modern design school in Europe.) She commissioned reproductions in 1973, the year before her death.

Isamu Noguchi (1904 – 1988) –  Noguchi’s mother recognized her son’s artistic proclivities early on and engaged him in the design of their home when he was just a boy. She also apprenticed him to a carpenter before he was 10.

Although discouraged from becoming a sculptor in his twenties by two mentors, Noguchi attended the Leonardo da Vinci Art School in New York City. He was attending Columbia University at the time. With some encouragement from a teacher at the art school, he dropped out of Columbia (where he was reluctantly pre-med) and started earning money creating sculpted busts of clients. In 1926, he won a Guggenheim Fellowship. The Guggenheim, designed by modern architect Frank Lloyd Wright, showcases the best in modern art.

With the Guggenheim money, Noguchi traveled to Europe to study and create abstract sculpture. His first New York show ended in failure when he didn’t sell a single piece. He went back to bust sculpture for wealthy clients to earn a living. He also failed to win any post-Depression commissions through Public Works Program or the Federal Art Program. Finally in 1935, he got work designing a set for famous choreographer Martha Graham.

He had some success as set designer and with sculpture in Mexico, but he really did not find reliable work until aligning with Herman Miller in 1947. His Noguchi table was a great success and he also aligned with (Florence and Hans) Knoll to design lamps and decor. In 1987, he was awarded the National Medal of Arts.

You can still get Noguchi Tables and other pieces at Herman Miller and Knoll.

Verner Panton (1926 -1988) – After studying at the Royal Danish Academy of Art, in 1951, Verner Panton apprenticed with fellow Danish creative Arne Jacobsen mentioned above. Panton quickly got a reputation as temperamental, and left to open his own architectural and design firm. Dedicated to modern principles, he created the Collapsible House, the Cardboard House and the Plastic House. These innovative structures won him a lot of attention.

He is most known in the United States, however, for his Mid Century Modern style furniture. In 1960 he created the very first single-form injection-moulded plastic chair.

Inspired by the human tongue, the chair established Panton’s career. He went on to exhibit his designs at museums and private events. You can buy Panton lamps at Finish Design Shops and others.