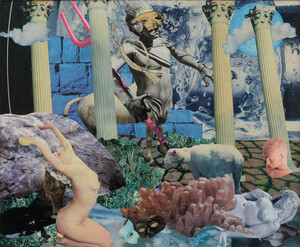 A single collection of photographs by Harlem Renaissance master, James Van Der Zee, which includes 14 images and an original price card from his studio in NYC, will be offered.  The average estimate is $1500-$2500 per work.  An important sculpture by Sargent Johnson will be included.  The glazed terra cotta head, Female Egyptian Head, c. 1940, features an architectural element in the construction of the subject’s hair, and pencilled facial features.  It was exhibited in the Johnson retrospective exhibition and is expected to sell for $30,000-$40,000.  A very important painting by the legendary Miles Davis will be sold.  The painting, 110” by 60”,  comes from Davis’ personal assistant, Paul Toledano, and depicts the artist’s abstracted figures, reminiscent of Basquiat’s, whom Davis knew and shared influences.  It is estimated at $70,000-$90,000.

On a more traditional note, Mary in Meditation , by Henry Ossawa Tanner, c. 1905, should get considerable interest.  Painted at the height of the artist’s career, and featuring one of his favorite subjects, the oil is expected to fetch between $60,000-$80,000.  An important oil by Hughie Lee-Smith, once in the collection of Malcolm Forbes, and recently included in a museum exhibition, will be offered at $60,000-$80,000.  The painting, 24” by 36”, depicts one of the artist’s iconic images: figures on a rooftop, looking out over the city contemplating the human condition.  There are several works by Lois Mailou Jones being offered, including a very nice post-impressionist landscape and several prints.  A sculpture by Elizabeth Catlett, Cabeza Cantando , is estimated at $20,000-$30,000, and there are several nice lithographs also included by Catlett.  Isaac Scott Hathaway worked as a sculptor in the early 20th century, creating images of important African Americans.  There are four works in the auction: a bust of Booker T. Washington, a plaque of George Washington Carver, as well as a cast of his hand, and a circular plaque of Frederick Douglass.  Five carborundum mezzotints by well regarded print-maker, Dox Thrash of Philadelphia are also included.  Other notable artists represented are Charles Sebree, Margaret Burroughs, Rex Goreleigh, Romare Bearden, Jacob Lawrence, Emma Amos, Edward Bannister, Allan Crite, Robert Colescott, Ernest Crichlow, Mavis Pusey, Sam Gilliam, Claude Clark, Ralph Chesse, and many more.